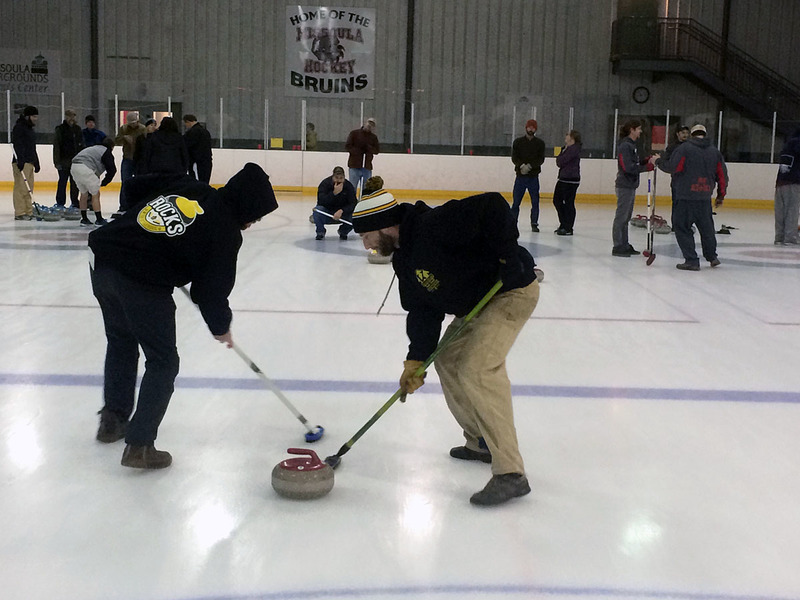 · Bring separate shoes for curling. Change shoes prior to entering the ice to keep ice clean. Salt and dirt will track onto ice, changing the conditions of the ice.

(a) A team is composed of four players. Each player delivers two stones, in consecutive order in each end, while alternating with an opponent.

(b) A team declares its delivery rotation, and the skip and vice-skip positions, (this means a skip can deliver from any of the 4 positions but must maintain that position during the game unless (d) ii applies) prior to the start of a game and maintains that rotation and those positions throughout that game subject to (d) (i). A team that deliberately changes its delivery rotation, or positions, during a game will forfeit the game, unless it was done when bringing in an alternate player.

(c) If a player is missing at the start of a game, the team may either:

(i) start the game with three players, the first two players delivering three stones each, and the third player delivering two stones, in which case the missing player may enter the game in the declared delivery rotation and position at the start of an end; or (ii) start the game using a qualified alternate.

(d) Where a player is unable to continue to play in a game, the team may either:

(i) continue play with the remaining three players, in which case the player who left the game may re-enter only at the start of an end.

(ii) bring in a qualified alternate at the beginning of an end, in which case the delivery rotation and the skip and vice-skip positions may be changed (the revised rotation of play applying for the remainder of that game), and the replaced player may not re-enter the game.

Definition of a player leaving a game: A player that delivers fewer than two stones in an end is considered to have left the game, except where rule R5 (i) applies.

(e) A team may not play with fewer than three players, all players delivering all their allocated stones in each end.

(f) In competitions where alternates are allowed, only one alternate can be registered and used in that competition. If there is a violation, the offending team will forfeit the game. To clarify For MCC the substitution rule for the Competitive League will be: In the event a team only has 2 rostered team members that show up for a game and the team has a substitute, the team can play the game with 3 (not 2 subs to make it 4) and does not have to forfeit. (you can also play with 3 from your team and 1 sub) No two team members and 2 subs, you need to play with only one sub as in rule R3 (f) above. Only one named sub/alternate can play for a team in a match. In this situation for our club, a substitute can be considered an alternate like USAC rule R3. No substitutes allowed for Competitive League playoffs. Teams must play with rostered players including their previously identified alternates.

(g) If a player delivers the first allocated stone of an end and is unable to deliver the second allocated stone, the following is the procedure for the remainder of that end. If the player is the:

(i) first player, the second player delivers the stone

(h) If a player whose turn it is to deliver is unable to deliver both of the allocated stones during an end, the following is the procedure for the remainder of that end. If the player is the:

All rules stated and posted by the rink are to be followed, with special adherence to the following:

NEW CURLERS ARE CAUTIONED TO BE VERY CAREFUL WHILE MOVING OR STANDING ON THE ICE!

For More Information On Curling: