Many of the members of the Missoula Curling Club didn’t grow up curling. They saw it on the Olympics — usually — and found themselves wanting to try out the sport.

We will occasionally hold formal learn to curls, but if you want to learn email [email protected] and we will work to find a time to get you on the ice.

Well, to have a good time. This is a sport where we yell a lot and sweep ice and slide around 40-some-pound hunks of granite. So don’t expect us to take ourselves too seriously. True, it is a competitive and really strategic game, but it is also totally fun. So we don’t expect you to have any knowledge of the sport or experience. You don’t have to know how to skate (there isn’t any skating) and you can show up in casual street clothes, although dress kind of warm, it is on ice after all.

Anybody. We have people aged 8 to 80 curling here in Missoula and so all ages are welcome. Those under 18 have to have a parent sign a waiver on site, but other than that feel free to come.

How Hard Is It To Learn?

Well, I think it is like golf (not that I know how to golf, but how I imagine golf to be). It is pretty easy to get the basics down and start playing. It is a lot harder to be good at it. But it’s pretty darn easy to have fun out there.

So, needless to say, experience is not required to come out and try the sport.

• It is generally agreed that curling was developed in Scotland in the 16th century on frozen marshes.
• Curling was first an Olympic medal sport in 1924, but did not obtain full medal status again until 1998.
• Curling is played in 48 countries worldwide. Canada leads the way with around 1 million active curlers.
• The modern curling stone is round, made of granite, and weighs about 42 pounds.
• The first known U.S. curling clubs were located in New York City, Detroit, Milwaukee, and Portage, Wis.
• Sweeping can help a stone slide up to an additional 15 feet.

It is a sport that mixes strategy and skill (and the occasional pint).

So how to get started. It seemed only right to have some Scottish guy tell you about the gear, so we found this:

But even more interesting than the gear and the basics are the stones themselves. The stones are granite and specifically resistant to water. Almost all of them come from a single island off the coast of Scotland. The New York Times did a pretty cool slideshow of images from the island, Ailsa Craig, just before the 2014 Olympics. There is also this video from World Curling TV: 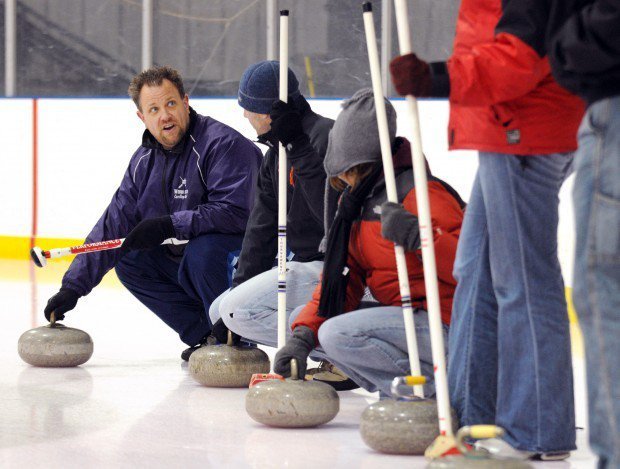