The Missoula Curling Club is one of the largest arena clubs in USA Curling. It has grown thanks to the ice time and support of Glacier Ice Rink, but in particular due to the dedication of the club members and the Missoula community.

Now, the Club proposes to expand the opportunities of curling in Missoula by building a dedicated curling facility that will allow us to greatly expand youth programs and take advantage of the all-abilities nature of curling to potentially add  a wheelchair league and seniors league. Our main impediment to this expansion is not the sport, the financial cost of putting on such programming or interest from the community. It has all come down to finding time in Glacier’s crowded schedule to make this all possible.

Our goal is to have the club curling on dedicated ice by the next Winter Olympics in 2026. 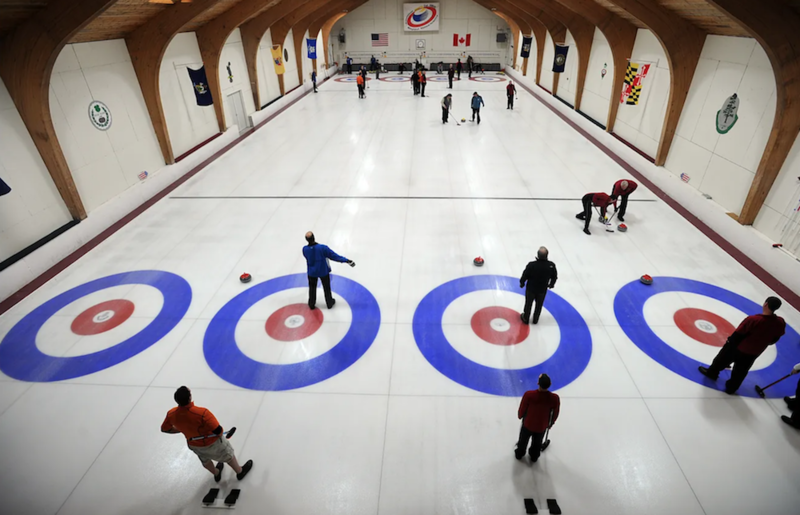 A dedicated curling facility will allow our 501(c)3 to operate to its full potential, creating important community events, a youth-centered program for both high school and college programs as well as a youth competitive curling program. We also plan a series of tournaments that could attract teams from around the country as well as official USA Curling events.

And for those hundreds of people who have curled and stopped because of late Saturday night league times or the unpredictability of arena ice, this is our opportunity to welcome you back to a dedicated facility where curling is community.

Dedicated Ice Plan
After more than a decade, the Missoula Curling Club has outgrown our roots at the Glacier Ice Rink. We now have more need for ice than they can provide and so we have begun the process of finding a home for the club where we can maintain a 9-month or year-round, four or five sheet curling facility.

Our current plan is to enter a 10-year lease at an existing facility and retrofit it to house the sheets, the chiller needed to operate the facility, locker rooms, a warming room and a beer and wine bar or small restaurant.

We have built a business model that aims to keep the cost of individual games similar to that of the current winter league (about $15 - $20). We will create a club where people can come to many open curling and learn to curl sessions, where leagues run most weeknights and membership allows people time to come in and practice as well as play in games.

The facility will ideally be within the city limits or just beyond. A commercial realtor, contractor and architect who have curled are all helping us identify possible properties and connect us with owners. We have raised money already to be able to enter into letters of intent with possible properties to negotiate improvements and lease parameters.

We are also working with ice making companies to identify systems we could put into a leased space and how they would operate. The club has also had early conversations with partners who may be interested in running the concessions and beer operations.

In short, the club has built a business plan, raised some of the early capital and made the business and professional connections to be able to move should a property that fits our needs becomes available. 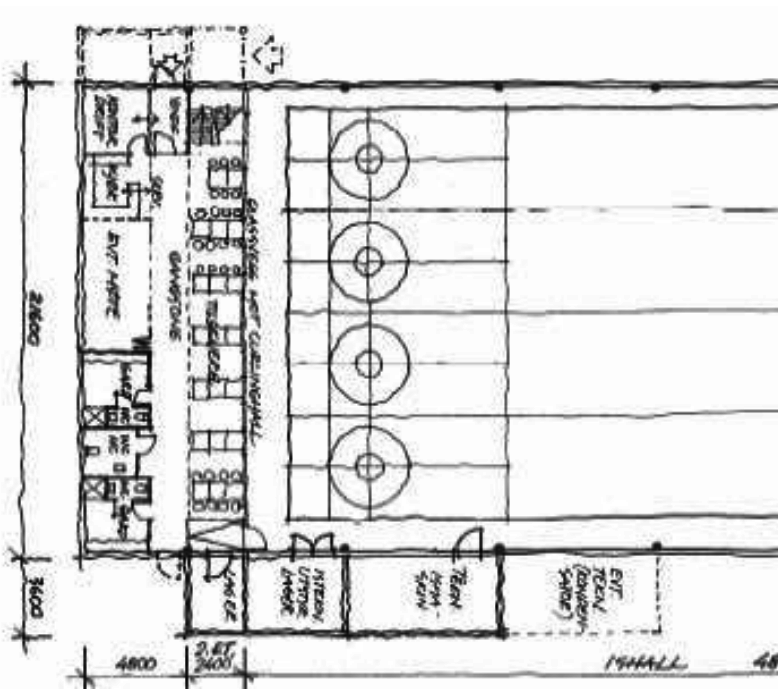 Based on a detailed budget of startup costs, we estimate it will take approximately $2 million to get the dedicated facility up and running. The following estimates are for a 4 sheet facility and are based on discussions with ice system vendors, an architect, a general contractor, a structural engineer, and an HVAC specialist. These are not detailed quotes; therefore the ranges are significant.

While there is a more detailed budget available, the large line items include:

Chiller - the system that removes heat from the fluid that runs through the plumbing to the piping in the sub-floor. The captured heat is either expelled outside or can be re-used to warm other parts of the facility (at greater up-front expense). Redundancy and capacity for future expansion influence cost.

Subfloor - the base layer that houses the piping and supports the ice. Piping must be held perfectly in place to ensure even chilling, and the surface must be perfectly level to ensure level ice. Subfloor options range from roughly six to eighteen inches thick (meaning the ice is typically higher than the warm room). Length of operating season, off-season use, and portability all influence cost.

Plumbing - the system of pipes that run and return cooled fluid (e.g. glycol) between the chiller and the head manifold that connects to the subfloor piping.

Piping - the system of smaller pipes, closely spaced a couple of inches apart, that carries the cooling liquid through the subfloor to turn water into ice and maintain that ice at an optimal temperature of 23 degrees Fahrenheit.

Start Up Lease - Once a lease is signed, it will take 9 - 18 months before the facility is operational. Depending on the size of the building and the monthly rate, this is likely a $12K - $16K / month expense.

Environmental - To produce and maintain high quality ice, we need complete environmental control over the conditions in the cold room. Insulation, air circulation, ice temperature, air temperature, and humidity levels must all be optimized for the ice. Sensors and controls must be included. Construction and HVAC considerations are above and beyond typical commercial code.

Fundraising
One aspect of the project is much of the funding needs to be raised once we have a facility, but once we have a lease we will only have a set period of time to raise the money. Therefore, we have developed a multiple-phase fundraising plan.

To enter into a letter of intent to negotiate with a property owner, the club must demonstrate the ability to pay six months rent. This funding demonstrates the seriousness of the leasee.

This phase of the fundraising effort is already complete.

A facility will need to have major construction to create the sheets, locker rooms, viewing area and bar/restaurant. Additionally, the cooling system, dehumidifer and chiller will need to be purchased. This phase represents the bulk of the $2 million needed to get the facility started.

We are now entering this phase of fundraising, exploring grants, donations and low-cost loan programs to assist with financing this phase. We hope to demonstrate the breadth of support during this phase by asking current and former curlers to donate some money to the effort. As we work with financial institutions and community groups, showing that the membership itself is committed to the project will be important and so towards the end of this year (for tax purposes) and in early 2023 we will be soliciting donations from the club.

Additionally, we are in talks with USA Curling and the World Curling Federation to apply for a no-cost loan to develop the curling facility. This program may fund up to 10% of our estimated costs.

We will also explore large donations that may include naming rights for the facility.|

As we move into the opening of the club, we will have additional needs for equipment and basic amenities. This phase may include donations of time, furniture or equipment or construction expertise as we make everything from scoreboards to locker room amenities to a video system to allow people to watch play from the bar.

Once we have a location, these needs will be identified and a call for various types of donations will be made to members.

Youth and All-Abilities
Although serious curlers could bend your ear for days about the unpredictability and inconsistency of arena ice (the call of “playing the zam[boni] line” is one of the prime jobs of a skip), the real impact of arena ice has been the inability to add programming that would serve more people and take advantage of this unique ice sport.

With no skating or contact, curling is one of the most accessible and affordable all-abilities winter sports. We could have a wheelchair league or a retirees league or a family league or a high school league. But we have been unable to start any of them because of the complexity of building interest and then finding available time at a rink run by youth hockey and with enormous time demands for adult hockey leagues. 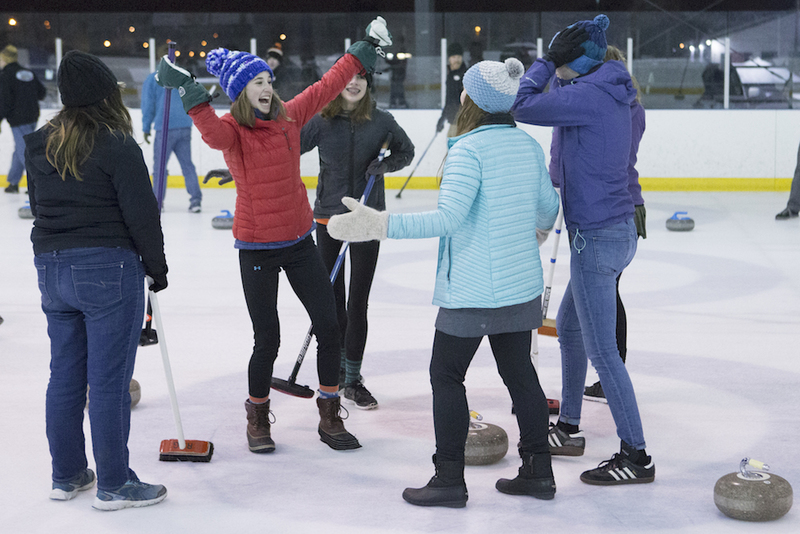 And so, we have tried to do the programming at the odd open slots. We have taught more than a thousand high schoolers over the years, but have been unable to offer them a reasonable time to get involved in the sport. We have had a University of Montana team, but have been unable to coordinate ice time from Glacier to start a class. We have had sessions during learn to curls for wheelchair players, but cannot offer more.

A dedicated curling facility changes all of that. Built into our plan is an aggressive plan to create multiple leagues to allow the development of youth programs that include partnerships with high schools, potential camps with Parks and Recreation, outreach to veteran groups and connections with physical therapy programs to encourage all-abilities curling leagues.

One of the largest group of curlers we have struggled to maintain are older curlers who do not want to play later into the night (or early morning). This group of seniors include players from outlying communities who will make the trek to Missoula now to play during open curling. To have a facility that would allow more expansion into daytime curling creates opportunities for those players who have retired or are free due to their schedules.

Among our current players there are those who would help organize and run senior or daytime leagues if the ice time were available. A dedicated facility offer them a chance to practice, build community and develop new leagues.

In addition to youth, senior, and wheelchair leagues, our plans include an array of tournaments and events. The Big Sky Bonspiel, one of the largest bonspiels in the northern U.S. Rockies, will continue, but we will add other events, including cash spiels, a brewery-sponsored brewer’s cup tournament as well as potential regional or national playdown events.

A dedicated facility will attract curlers from across the country as well as Canada to travel to Missoula. We will ideally partner with local tourism groups to make the Garden City a destination for curlers. The business and sponsorship opportunities for these bonspiels will also help expand the economic footprint of the club.

As part of a diversified business plan, we will also offer community groups and local businesses the opportunity to host curling parties and learn-to-curl events at the new facility.

These events can both bring in revenue as people find the teamwork of curling a great tool to bring groups together and can serve as a recruiting tool for the club.

We have spent years planning bonspiels, leagues, youth programs and events and the proposed dedicated ice location will allow the Missoula curling community to grow in new and exciting ways.

The club went through cycles of growth and shrinking as new people tried and some older members tired of the times. By 2019, the club was at about 170 members.

Then COVID swept the sports world. By the next season, we had shrunk to a mere 45 players.

But in the 2021-2022 season, the club undertook a concerted effort to re-engage with members and get people curling again. That year, the membership soared to 190 members, making it one of the largest clubs in the northern U.S. Rockies.

The 2022-2023 season is already off to a strong start and we will surpass 200 members, even though our ice time has not particularly improved from that inaugural season.  Member and partner support will be critical for the success of this venture.